This girl is all about adventure. Taking the path less travelled and getting that money shot.

From looking at @ImCannaBess Instagram of 50 K followers, you would never guess that she is as passionate about our fiscal deficit as much as she is about having a dab and going for a run. That’s because behind the perky smile and that camera lens is a professional young woman who is making a name for herself while undoubtedly helping carve out a path for other females following in her foot steps.

A Washington state native originally from Richland, Bess went to college at WSU, lived in China for a few months after, before relocating to Los Angeles for a few years.

While ready to make a move across the country to pursue politics in D.C., Byers was offered an opportunity by a friend that she couldn’t pass up. Within the week she was moving to Seattle, starting a new journey using photography, politics and her passion to lift up the growing industry.

“I’m really passionate about the economy, the national debt. I lived in China after college. It was around the time that we borrowed the trillion-dollar stimulus. It was such an eye opening experience to know that we borrowed a trillion dollars from this country, and they have their own set of issues. Why is our country borrowing money, why is it borrowing it from China, and what kind of affect is this going to have? I started watching fiscal issues more and just how it all ties into taxes. And I hate the idea of being forced to pay a corrupt government money, things like social security is going to be depleted in 15 years and that is part of the administration’s own report.”

Wow. Yes, we just discussed our national debt and deficit, all over an array of oils and buds. This girl means business!

But more than just an entrepreneur, Byers is an authentic, self-taught leader who isn’t afraid to speak her mind.

“My end goal is to get into politics and push for freedom and economic liberty for everybody. Give people the freedom to do what they want, like grow a plant at home.”

Who could disagree with that?! Not I. Byers has some legitimate worries. Washington state is the only one that allows recreational cannabis but does not condone growing cannabis personally.

“There are just inconsistencies, and the people who seemed to have written the legislation, there are a lot of things in there that make me think they don’t consume cannabis or have an understanding of it, so that’s kind of concerning.“

Recently, some positive changes have occurred for i-502, including the signing of Senate Bill 5131, which allows for sharing of cannabis, such as passing a joint to your mom or spouse, without the previous repercussion of a felony. If you want to read more about that, here’s our blog about the new bill!

One take away from my time with Bess Byers is that she loves smoking weed as much as she enjoys working with it and fighting for it. This girl puts proprieties first and is a great representation of a cannabis industry professional. Through our conversations I was really inspired to make the most of every one of MY days. I truly enjoyed being a part of her life for the moment.

“I honestly don’t really smoke that much. Don’t get me wrong, if I’m going to beast out some photo edits on the weekend at home, yeah I will totally chief it up. I found myself more productive at work when I’m not stoned. It actually helps my day go by faster- just doing stuff, I’m on my grind. Then, at the end of the day, when I get to relax and smoke a bowl, run Greenlake, pet my cat, make food and watch tv.”

So there you have it, if you are looking for a new workout routine, maybe a dab and run should be a part of it, favorite here being Super Silver Haze, at least for Bess.

“Dabs and running! That’s my distress. At the end of the day, I love to come home, take a fat dab, put on a playlist and go run around Greenlake.”

Well the interview just didn’t seem like enough, so I tagged along on a hike and shoot in the beautiful PNW to see this powerhouse in her natural habitat. Behind the shutter, working her magic! Behind the scenes of a Bess Byers shoot!

Tell us about your first cannabis experience.

It was fall my junior year of high school. My friend’s older brother enlisted in the military so it was his going away party. My friend and I were hanging out with a bunch of guys who were our friends, but also crushes who’d recently graduated. They were smoking weed and asked if we wanted to try. I said yes and hit the pipe. I took a fat rip, then coughed out a bunch of smoke. The guys laughed at me. I handed my car keys to my friend and the high kicked in. I felt like I was in a movie. Everything seemed surreal. We left soon after.

I remember on the drive home feeling like I was on the Back to the Future ride at Universal Studios. We got back to my mom’s where I tiptoed to the kitchen. As quiet as possible, I started to get ice cream out of the fridge. My friend asked what I was doing and I said, “Shhhhh! They’ll hear you!” She said, “Who’s they?” I replied, “The audience.”

I KID YOU NOT.

How did you get involved in the industry?

I lived in Los Angeles two years ago and was really active in politics. I received an opportunity in Washington DC and was dead set on going, especially with the upcoming 2016 election. I mentioned moving to one of my friends who lives in Washington and owns a grow. She asked if I’d be interested in working in cannabis instead. The offer paid more than the DC gig. People like pot more than politics. I like Washington State more than DC. Pot is political. I’m from here. It just happened. In three weeks I left LA, moved to Seattle and started working in weed.

Favorite strain and why?

To smoke or photograph? Ha ha! My favorite to smoke is Super Lemon Haze. I love the smell and uplifting effects. I love to dab SLH by Western Cultured and X-tracted, then run Green Lake. As for photos, anything Cookies looks bomb behind the lens. I love deep purple plants, and when grown well, the trichomes always pop in macros. 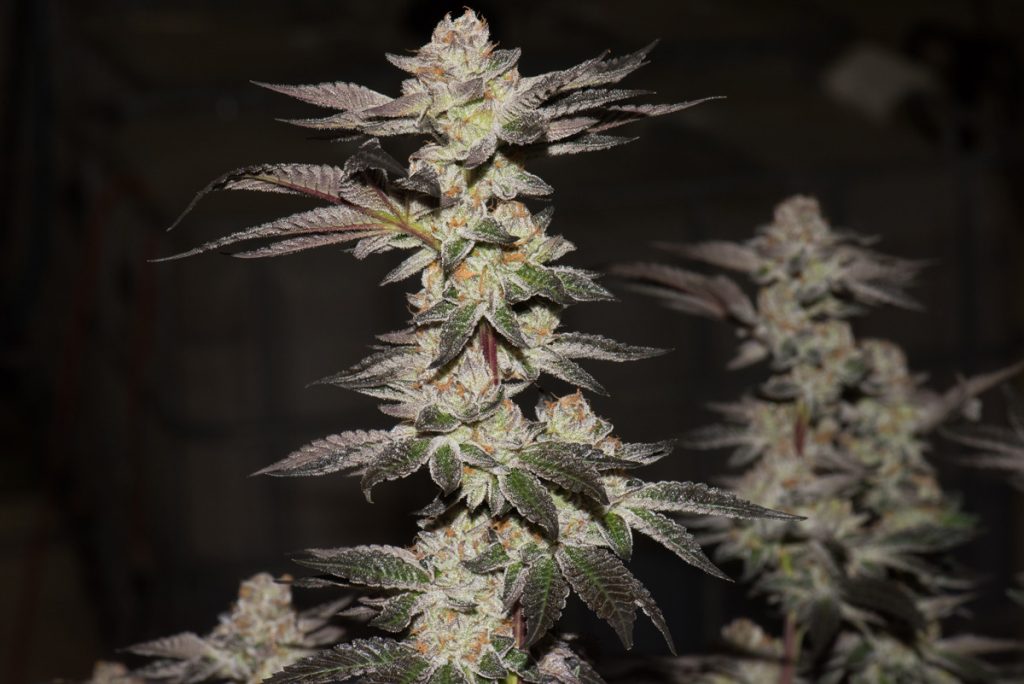 Geez, that’s a tough one. It depends what I’m doing. I love to smoke joints with friends in crazy Northwest locations. It amplifies your high to smoke a joint at sunset on a boulder 4,000 feet above sea level. If I’m solo seshing and getting stuff done, I love dabs. Catching Bess Byers aka @ImCannaBess in action while on set of a very PNW shoot.

Either the first time I smoked with my mom or the first time I smoked with my dad. Mom’s weekend my sophomore year of college, my mom found weed in a martini shaker. She picked up the bag and we all scattered. I was so worried she’d be upset. Well a couple hours and a couple drinks later two of my friends on the football team stopped by. They reeked of weed and my mom called them out. I said, “they’re on the football team, it’s cool.” My mom was so impressed I knew football players (she wasn’t as social at WSU) so we convinced her to smoke with us. She just had to tell us where she hid the weed she found in our martini shaker! Well Mary Jo(my mom) hid the Mary Jane behind the blender, so we blazed up. I have this hilarious photo from that night. My friend on the football team is smiling in the corner, I’m hitting the pipe and my mom looks bomb AF wearing a “Cougar Moms Rock” shirt.

As for my dad, we smoked weed together on camera for the first time. WatchCut reached out to me for their “Parents and Kids Smoke Weed Together for the First Time” video. I’d never smoked with my dad, so I suggested it. It’s like he’d waited years for me to ask. He drove over Snoqualmie Pass in an early December snowstorm to smoke weed. Since I got into the industry, my dad consumed cannabis twice. Both times he had horrible experiences. Once with a medical brownie where he ate too much. I called him, he got paranoid, felt like he might die and barfed all night long. The second time, he smoked a Blue Dream joint with an employee. My dad started to think the employee was a spy. Alas, I did NOT want my dad to have a bad experience. I rolled him a CBD rich Blue Hawaiian joint, with a little sprinkle of Blue Dream. Me? I rolled myself a Blue Dream x Dutch Treat joint with (you know it) Super Lemon Haze wax. Moral of this story — I got ripped with my dad, then the video went viral.

How did your family react to your profession?

My dad was the first person I told about the job offer. He’s actually the only person who encouraged me to take it.

What it takes to get ‘the shot’ sometimes!

Advice for someone starting in the industry?

Find what you love to do and go for it. Never stop learning. Listen to others. You don’t always have to blaze before work.

Where do I see the industry going?

I anticipate marijuana going mainstream. We’ll be as desensitized to pot as we are to alcohol and cigarettes. There will be national gardens (think Budweiser of bud) and craft cannabis (canna get a Fremont Brewery). Unless marijuana is de-scheduled, I support states passing their own legislation. I don’t trust the federal government to legalize cannabis without it pushing some hidden agenda.

Goals for the future?

My end goal is still politics. Maybe after 20 years of private sector cannabis experience I’ll run for office? I’d like to see changes to gun rights for medical patients, dosage regulations and the excise tax. I also want to opt out of Social Security.

Similarities in this field? Differences from past jobs?

I’ve always loved photography, journalism, branding and communications. Now I just get to do it for something I love — cannabis! A beautiful day to hike our PNW backyard and take some killer shots!

Check out our Blog!

Want to see our Menu?

Order Online and Pick up at the Express Window

4 Things to Do This Summer: Bellevue, WA